Empowering ‘Happy Waves for All’

1,203 swimmers started from the Golden Bauhinia Square Public Pier in Wan Chai and completed the 1-km distance swim across the harbour to the finish at the Avenue of Stars in Tsim Sha Tsui. The Race is the first large-scale outdoor public-engaged event sports event following the fifth wave of the epidemic. After the race, swimmers took photos sharing their joy and cheering along the Avenue of Stars echoing the theme of “Empower Happy Waves for All”.

This year’s race was staged by way of a rolling-start of five groups. The spotlight was on the Racing Group of 100 swimmers that took to the water first. After a morning of intense competition, Kwok Chun Hei and Wong Ching Lam Athena clocked 14’25.6 and 15’11.4 respectively, triumphing in the Men’s and the Women’s Racing Group. Li Edmil Kong Fei, the young swimmer at his 15 was declared the champion in the New World Springboard Championship, with a time of 19’45.5.

Full results of the race will be uploaded to the New World Harbour Race website (https://www.hkharbourrace.com/).

HKGSA: Our gratitude to the Government Departments and Organisations; NWD: Pleased to Witness the Excitement Shared by the Public

“As a much regarded annual sports extravaganza, the New World Harbour Race provides swimmers with a unique opportunity to take a competitive dip in the Harbour. We would like to express our gratitude to the relevant government departments and organisations for their cooperation and to New World Development for their unremitting support, without which we would not be able to make the New World Harbour Race a success. Despite the challenges presented by the recent epidemic,” said President of HKGSA Mr Ronnie Wong. “It is our wish that this unique Hong Kong-style race offers an opportunity for people all over the city to experience and enjoy the vitality of swimming, and for overseas swimmers to come and join, in helping further promote swimming culture in the local community.”

Mr Sitt Nam-Hoi, Executive Director of New World Development, said, “It is inspiring to see this Race being be held successfully, for the second time, despite the challenges presented by the pandemic. The smiling faces of swimmers has inspired the Hong Kong public, reflecting the theme of this year’s race – ‘Empowering Happy Waves for All‘. By co-hosting the Race with HKGSA, the Group hopes to not only support the local sports development, but also to promote a positive vibe and a healthy lifestyle in the Hong Kong society.”

This year’s race also features Siobhan Haughey, double silver medalist at the Tokyo Olympics, and former member of Hong Kong Swimming Team Kevin Chu, as event ambassador. And it is the first time for that Kevin Chu has participated in swimming race since his retirement and was ready to make waves in the Racing Group. As the first-ever Event Ambassador joining the Racing Group, he achieved a time of 17’12.4. 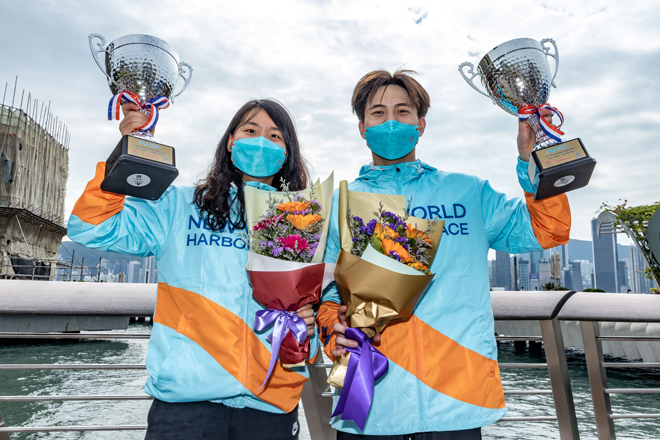 Kwok Chun Hei and Wong Ching Lam Athena clocked 14’25.6 and 15’11.4 respectively, triumphing in the Men’s and the Women’s Racing Group.

Kevin Chu, the former member of Hong Kong Swimming Team joined the Racing Group as the event ambassador and achieved a time of 17’12.4.

The event ambassador – Kevin Chu (left) – was joined by former members of Hong Kong Swimming Team Claudia Lau (centre) and Jamie Yeung (right) to attend the Racing Group and cheer up swimmers at the venue. 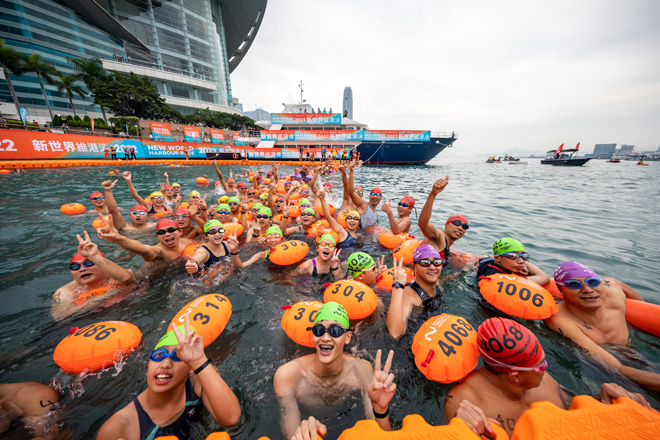 1,203 swimmers plunged into the water in batches and swam from the Golden Bauhinia Square Public Pier in Wan Chai to the finish at the Avenue of Stars in Tsim Sha Tsui. 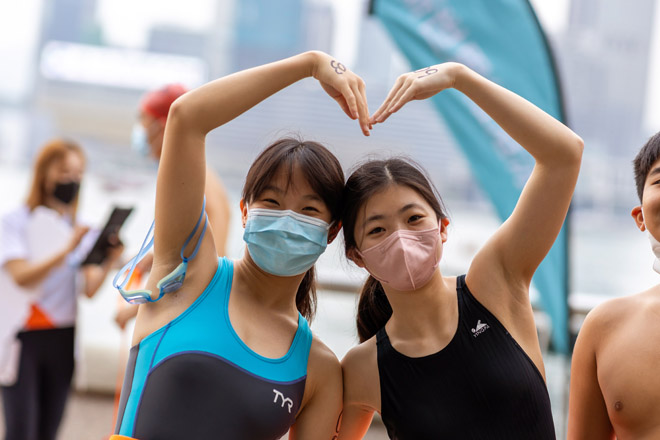 The Race is the first large-scale outdoor public-engaged event sports event following the fifth wave of the epidemic.

Hong Kong China Swimming Association (“HKGSA”) was founded in early 1951 by the President, Mr. A. de O. Sales, and it took part for the first time in the Olympic Games in Helsinki 1952 with four swimmers. It was subsequently registered under the Societies Ordinance on 28th April 1960. It is a member of the Federation Internationale De Natation (FINA), Asian Swimming Federation (AASF) and Sports Federation and Olympic Committee of Hong Kong, China (SF & OC). It is the sole governing body of swimming sports in Hong Kong covering all swimming, diving, water polo, artistic swimming, open water swimming and masters competitions and activities here. HKGSA will comply with Olympic Charter, the rules and regulations of the International Olympic Committee, SF & OC, FINA and AASF

In the past 70 years, the Association has been promoting and developing swimming sports, thus raising the standard of swimming, nurturing elite swimmers and providing training to athletes, officials, judges and coaches in Hong Kong through organizing different competitions, training courses and relevant teaching activities. The Association now has over 120 affiliated clubs with over 10,000 registered athletes, offering all properly accredited persons the opportunity to represent Hong Kong in a wide range of competitions and meetings here and abroad.

(This press release is issued by ActionHouse International on behalf of the Hong Kong China Swimming Association and New World Development Company Limited.)